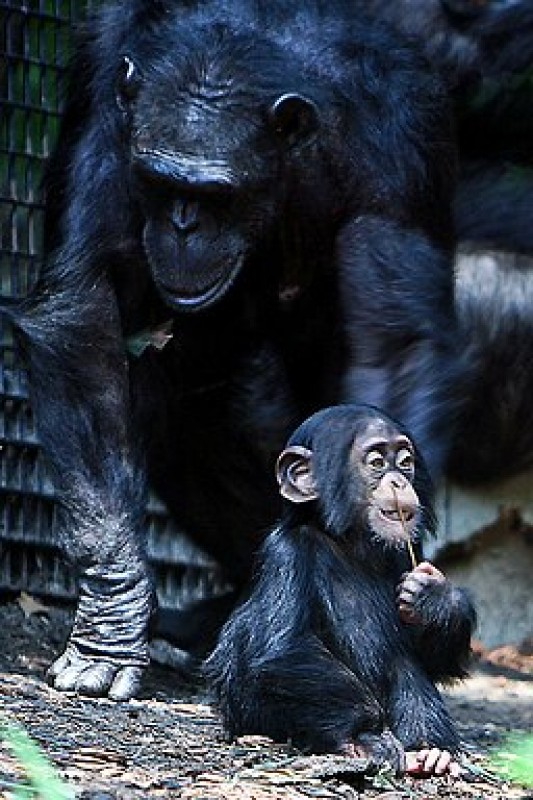 Chimpanzees appear to possess similar obstetric adaptations in their pelvis as humans, despite giving birth to much smaller babies. Specifically, the way in which average female pelvic shape is different from the average male is strikingly similar between the two species, even though the magnitude of these shape differences is clearly different. We explain these findings under our facilitated variation hypothesis: the genetic-developmental processes that underlie pelvic sex differences are highly conserved, while small regulatory changes to these core components are more evolvable and act like a “knob” with which to dial up or down the magnitude of these sex differences.

My colleagues from the University of Vienna, including Eva Zaffarini and KLI alumni Barbara Fischer and Philipp Mitteroecker, and I discovered a surprisingly high degree of similarity in sexual dimorphism in human and chimpanzee pelvises. 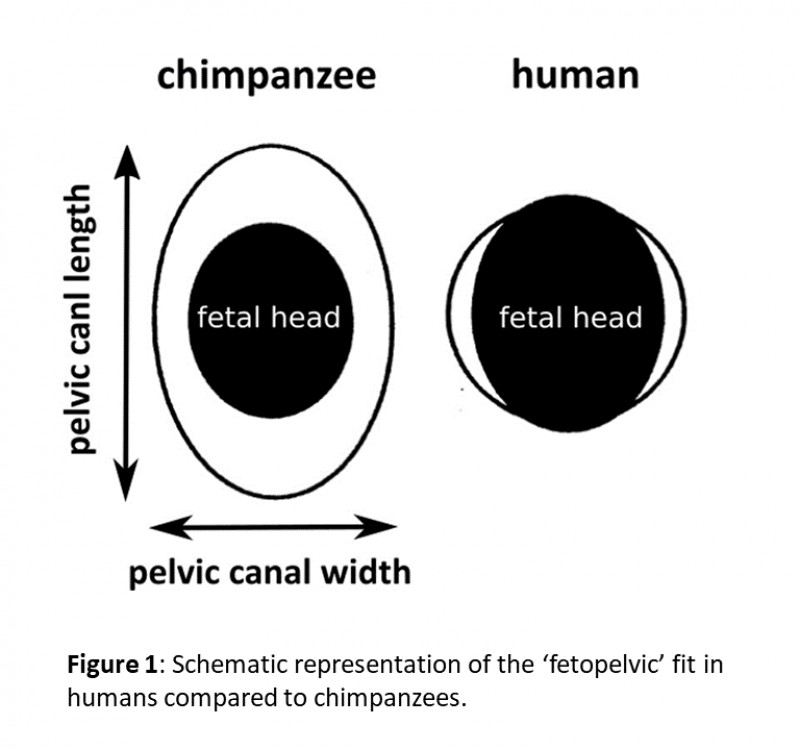 This pattern of pelvic sex differences is well known in humans, with women’s pelvises possessing many shape and size traits that make for a more spacious birth canal, which has long been considered to be an adaptation to birthing large babies. But here’s the kicker: chimpanzee babies are a lot smaller and there is plenty of space for them in the chimpanzee birth canal (Fig. 1).

So why do chimpanzee females differ from males in pretty much exactly the same way as humans? We think we may have uncovered an ancient and conserved evolutionary pattern that throws new light on the evolution of human sex differences, published in Nature Ecology & Evolution.

Chimpanzees – including bonobos – are our closest living relatives. There have been several studies over the years that reported hints of sexual dimorphism in the chimpanzee pelvis that looked to be similar to that in humans, but it was not clear just how similar this pattern might be and what underlying evolutionary and developmental factors could explain it. After all, sex differences often point to different selection regimes between the sexes, and while this makes sense in humans – only women give birth and benefit from, indeed need a larger birth canal – chimpanzee babies are much smaller relative to the pelvic canal and the assumption has always been that the obstetric selection that acts on human females is not present in chimpanzees. To get at the bottom of this, my colleagues and I decided to study human and chimpanzee pelvises in the same detailed way using 3D geometric morphometrics (Fig. 2) and quantify the similarity in sex differences in the two species. 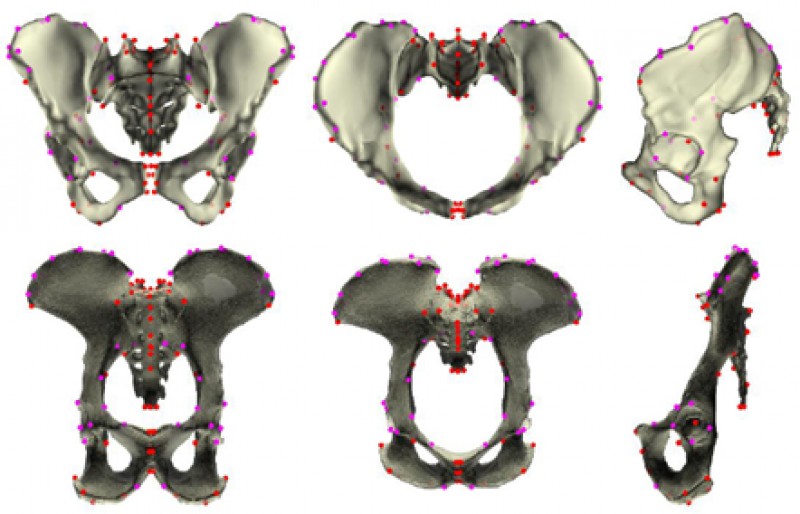 Despite clear species differences in overall pelvic morphology, we found that the pattern of pelvic sex differences – all the specific shape traits that jointly differ between males and females – was nearly identical between the two species (Fig. 3 and 4). These could not be explained by body size. However, the magnitude of these differences was twice as large in humans compared to our ape cousins. These findings suggest that the pelvic sex differences thought to be characteristic of humans did not in fact evolve from scratch in our lineage, but were inherited from a common ancestor with chimpanzees and subsequently exaggerated over the course of human evolution in response to obstetric selection related to the increase in brain size (and thus head size).

Figure 3: Pelvic sex differences in humans (top row) and chimpanzees (bottom row). Despite overall species differences in pelvic shape, the way in which males and females differ is highly similar in the two species. (Original figure from Fischer et al. 2021.)

But just how old might this shared pattern of sex differences be? When looking at female and male pelvises of a wide range of primate and non-primate mammals in natural history collections, I noticed pelvic sexual dimorphism in many species (Fig. 5). In some species, they can easily be seen with the naked eye, and these are often species with relatively large neonates, whereas in others they are much more subtle, and these are usually species known to have small neonates. Digging through the scientific literature revealed reports of pelvic sex differences – of a pattern similar to that in humans – in many placental mammals, but also in marsupials. Marsupials (e.g. kangaroos, opossums) give birth to the tiniest of neonates of any mammal group, so female marsupials really do not need more spacious pelvic (birth) canals than males because there is already plenty of space. The marsupial case is therefore strong support for an ancient, evolutionarily conserved pattern of pelvic sex differences. 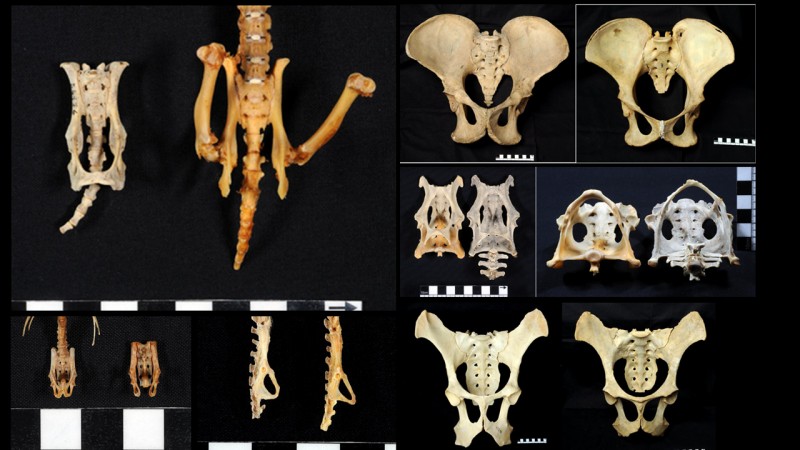 We draw on the central concept of facilitated variation in EvoDevo and the extended evolutionary synthesis (EES) to explain the apparent pervasiveness of the pattern of pelvic sex differences and the variability in its magnitude across mammal lineages. We propose that the genetic-developmental machinery, such as the endocrine system, underlying the presence of pelvic sex differences is conserved, whereas the “knob” with which to dial up or down the degree of dimorphism – probably the amount of hormone secretion and reactivity in the pelvis – is more evolvable and can respond rapidly to selection, like when relative fetal size increases in a lineage.

But where and in response to what may this conserved pattern of pelvic sex differences have evolved? The marsupial case alone suggests that this is a very old pattern. But as it turns out, even among certain small-bodied turtles that lay a single large egg females have larger pelvic canals than their male counterparts, whereas closely-related turtle species that lay relatively smaller eggs do not show these sex differences. There also appear to be sex differences in bird pelvises, but so far this has not received much scrutiny in this group. It would make sense if the pattern of pelvic dimorphism first arose in egg-laying amniotes, because eggs that are large relative to the maternal pelvis might also be at risk of becoming obstructed or damaged during oviposition – just like live offspring during birth – and so natural selection may well have led to similar ‘obstetric’ adaptations in birds and reptiles. Birds and reptiles are the sister clade to mammals and thus share a common ancestor with the latter. To have uncovered such a potentially very old pattern is very exciting, which we are currently investigating in a broader comparative pelvic study.